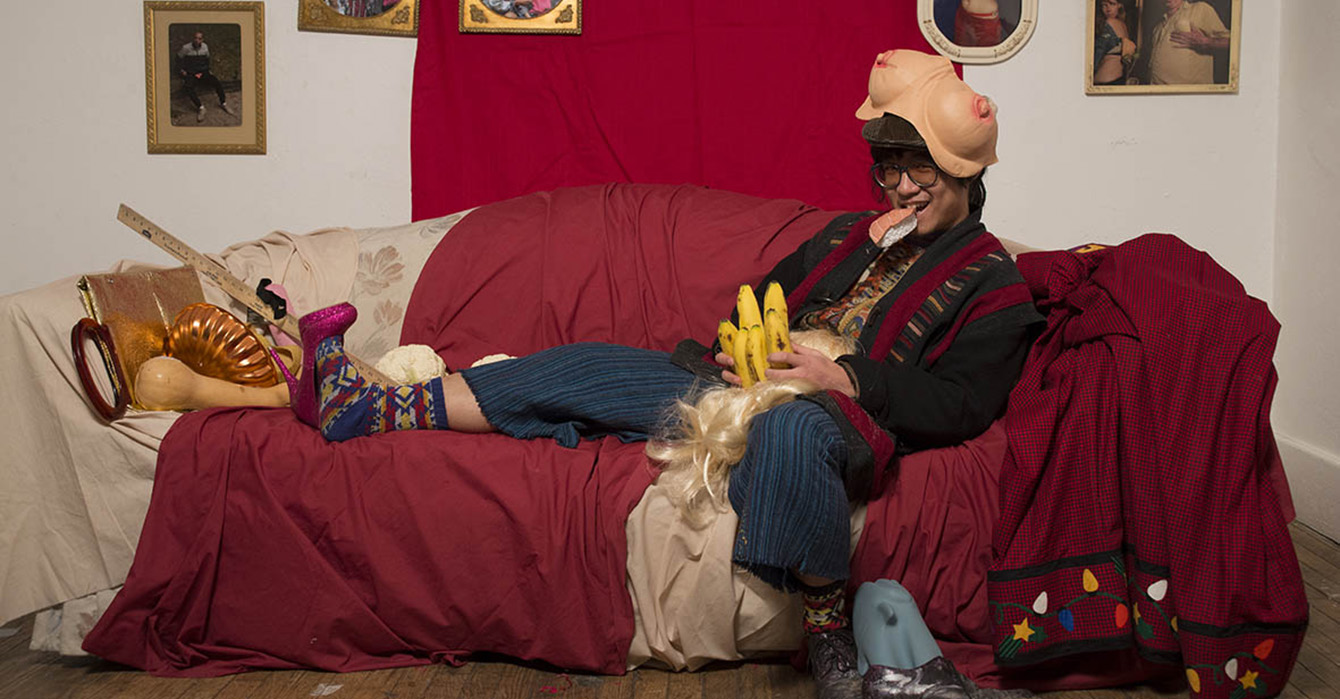 Through this series of photos shot by the artist Laura Heyman I intended to present a finished pictorial form of my plays with vegetables, fruits, and other objects to replace my missing breasts. Since my approach to photography comes from performance art, these photos are a record of an action in front of the camera – the replacement of a breast. My subsequent projects originate from this initial idea, involving audience and fellow artists in the same play. These next series present other improvisations, in different contexts, also directed by me.

After playing with vegetables for the camera, I have decided to involve other people: fellow artists and random audience members. My idea was to create a context in which the act of replacement becomes a shared act. My belief is that people learn more actively through participation and through personal experience rather than absorbing information detached from action. I bought fruit and vegetables from one of Berlin’s markets in Kreuzberg and went to a birthday party with fellow artist Voin de Voin. The party was in a backyard where we played with the vegetables. The photos were taken by me and some guests at the party, whose names I do not know. 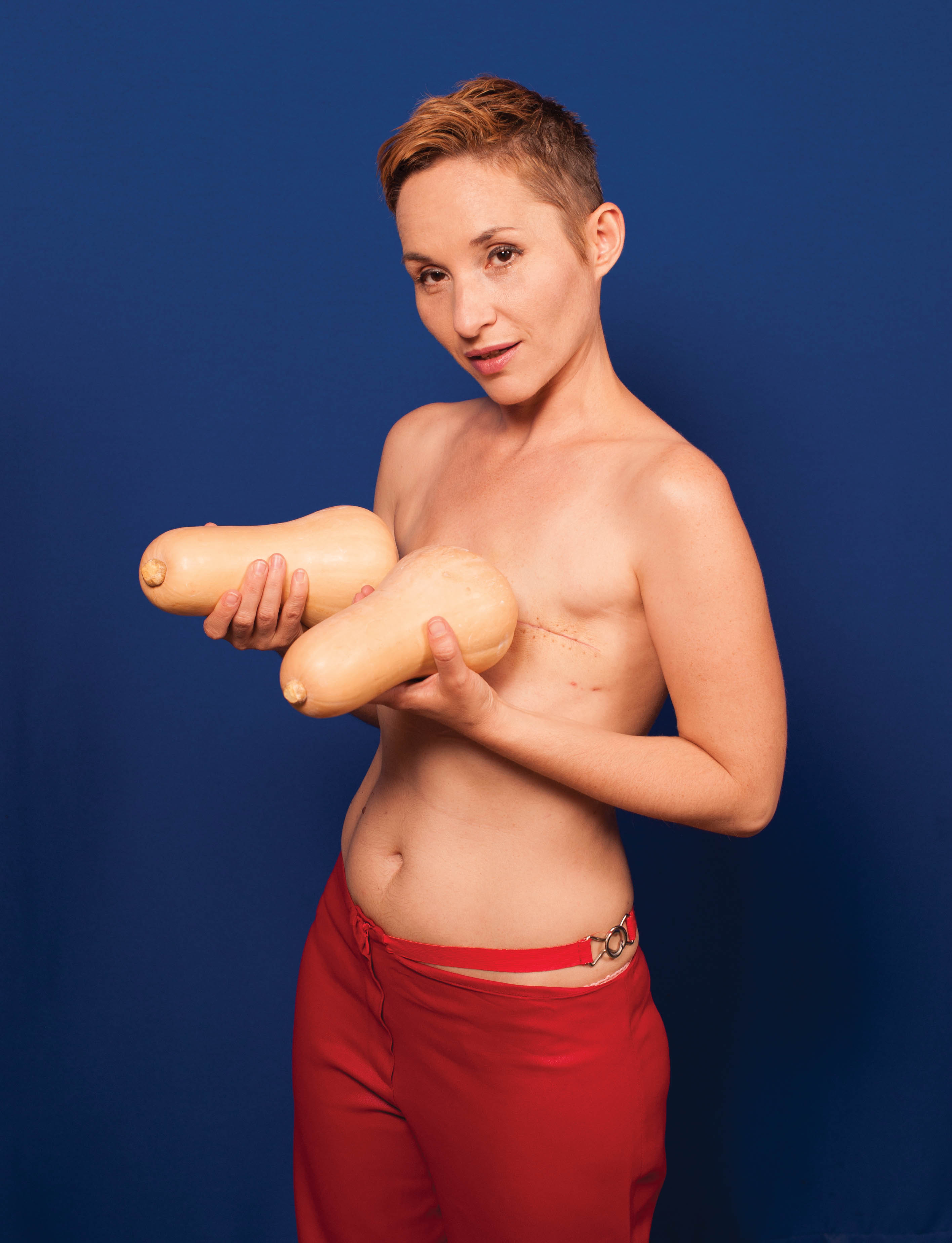 Perhaps there is something in our nature that compels us to look for similarities between objects and body parts. At a first glance, these comparisons seem like intriguing riddles. “Look at this anthropomorphic potato!,” someone shouts happily, while working in the garden. “Oh, and this carrot is almost like a little person! Not to mention the mandragora root!” It is precisely because of its similarity to the human body that mandragora root was once so popular among alchemists, magicians and witches.

But why is it so important for us to “spread” our body over everything around us? The point is perhaps to extend our dominance to its limit: to assign a “carnal name” to things that have nothing to do with the human body. Humans seem to seek affirmation of their own importance and their supremacy over the world around them, annoyingly projecting their morbid ego over everything living and non-living. Italian artist Giuseppe Arcimboldo used this simple archetype for his portraits of kings and dignitaries made of fruits and vegetables, thereby creating a total “prosthetic replacement” of the meaty flesh with the vegetable. This displacement was not horrorprovoking at all – for some reason, it has had unbelievable commercial success for centuries.

Perhaps what the kings saw in Archimboldo’s work was visualization of the so-called “transmigration,” or in this case, the passage of the soul into the tutti-frutti universe; or perhaps a trendy alchemist metaphor, representing the primal nature of life, the secrets of being, while also being entertaining.

It is important for people to be the ones to give names and assign meanings, affirming unquestionable anthropocentrism and the chimeric phantasms of corporal existence. But in the end, the human being appears to be just a big piece of meat, shaped “in the image and likeness.” From time to time, this meat spoils and rots, and in the place of the aesthetically pleasing anthropo-perfectness appears a pile of shapeless rottenness, which can not be put back together by any means. This rottenness does not look like a carrot or an eggplant anymore; it has reached the peak of entropy, its order has been completely destroyed.

But another scenario is also possible, where entropy takes over a single organ, thereby depriving the corporeal unity of aesthetic cohesion. Often, the resulting product is scrapped by society. The defective body evokes everything but the desire to be in the same place as the scrapped organism. When the artist approaches this topic, she immediately finds herself in a mournful vacuum, surrounded by tense silence, horror and disgust. It becomes immediately clear that this subject is actually a complete taboo. Society requires the defect to be hidden as well as possible, covered up by the prosthetic, so that the same society can be protected from the shock of facing the destandardized organism. Another tried and tested approach in this case is to glamorize the defect and transform it into a fetish. However, this only works for a small group of people. The normative majority will never accept the scrapped anthropo-model, which will never be given permission to have a wholesome presence in society again. The shameful stigma of the semi-human, the invalid, the loser will be assigned to it immediately and forever.

Yes, it is true that society has undergone much transformation because of political correctness and instated tolerance, which is why we no longer forcibly deport the powerless to places where we do not have to see them. But is this society really so welcoming and gracious? Of course not! No matter how much we discuss inclusiveness, people are most often afraid of any and all deviations from the norm. The “defective” person is like a horrible distorted mirror in which “the norm” is reflected as disgusting. “The norm” wants to see itself in its proper form, and only.

For instance, according to the standard, women must have breasts. It is inappropriate that suddenly there would be emptiness in the breasts’ place. This place has to be occupied by an aesthetic replacement. The artificial, non-living tissue has to be the one to “communicate” with the world. But the artist is an artist in order to transgress these rules, make fun of them, and instigate discussions of topics that are disruptive to our consciousness, announcing through her body the coming of the Real Alien, not just its manufactured formal analogue, a product of textual equilibristics. At the end of

the day, the textual construct always loses out to the real body. “Death is just a word!,” Derrida said and transmigrated to another state of post-corporeal existence.

But let’s look at examples. There is the artist Boryana Rossa with her recent ironic re-enactment of VALIE EXPORT’s performance Touch and Tap Cinema (Tapp- und Tast-Kino, 1968) and here is also another Boryana – a post-surgical anthropo-model, deviant from the standard: “freakish”(her breasts have been removed in order to avoid cancer). What follows from that? What is to follow is of course a provocative experiment! You (the society) say, you are tolerant and patient. You applaud Angelina Jolie and worship her courage. OK then! Let’s make this “cinema” real! This cinema is coming to you! Welcome it!

“Why the hell should I have to!?,” someone might say. “I do not want to know anything about these things. Let her live out the rest of her days on the ‘island of bad luck’ while we drink our champagne!” “Wait!,” I will say. Boryana is not the first woman in the world who has had a double mastectomy and unfortunately she will not be the last, but Boryana is an artist who illuminates this issue without sniveling or pathos. She forces society (or at least part of it) to think about it and accept the fact that this particular issue should not cut us off from irony and creativity. In the end, breasts are nothing more than an eggplant in a vegetarian diet, which can just be taken out from our daily meal and replaced with a turnip. 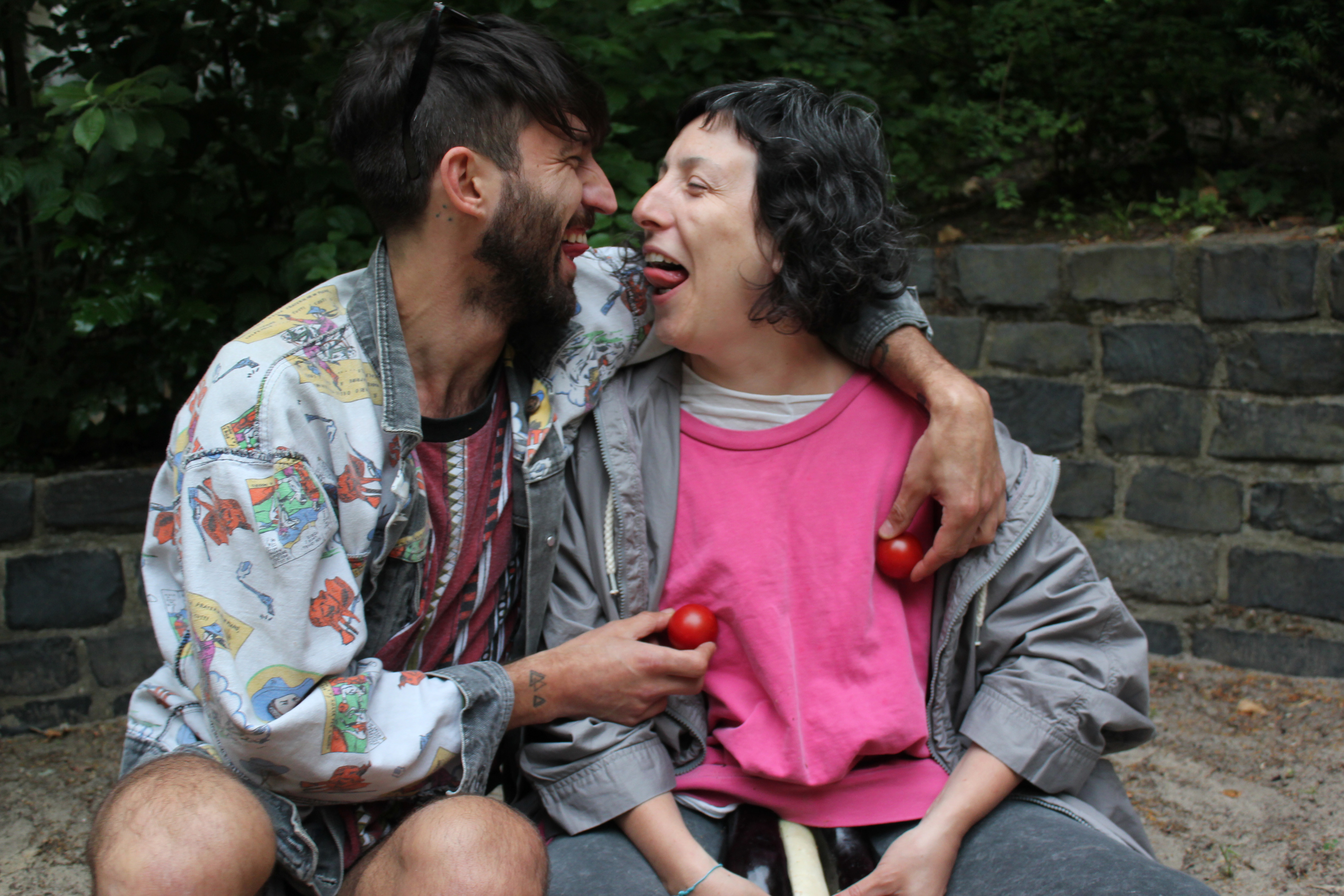