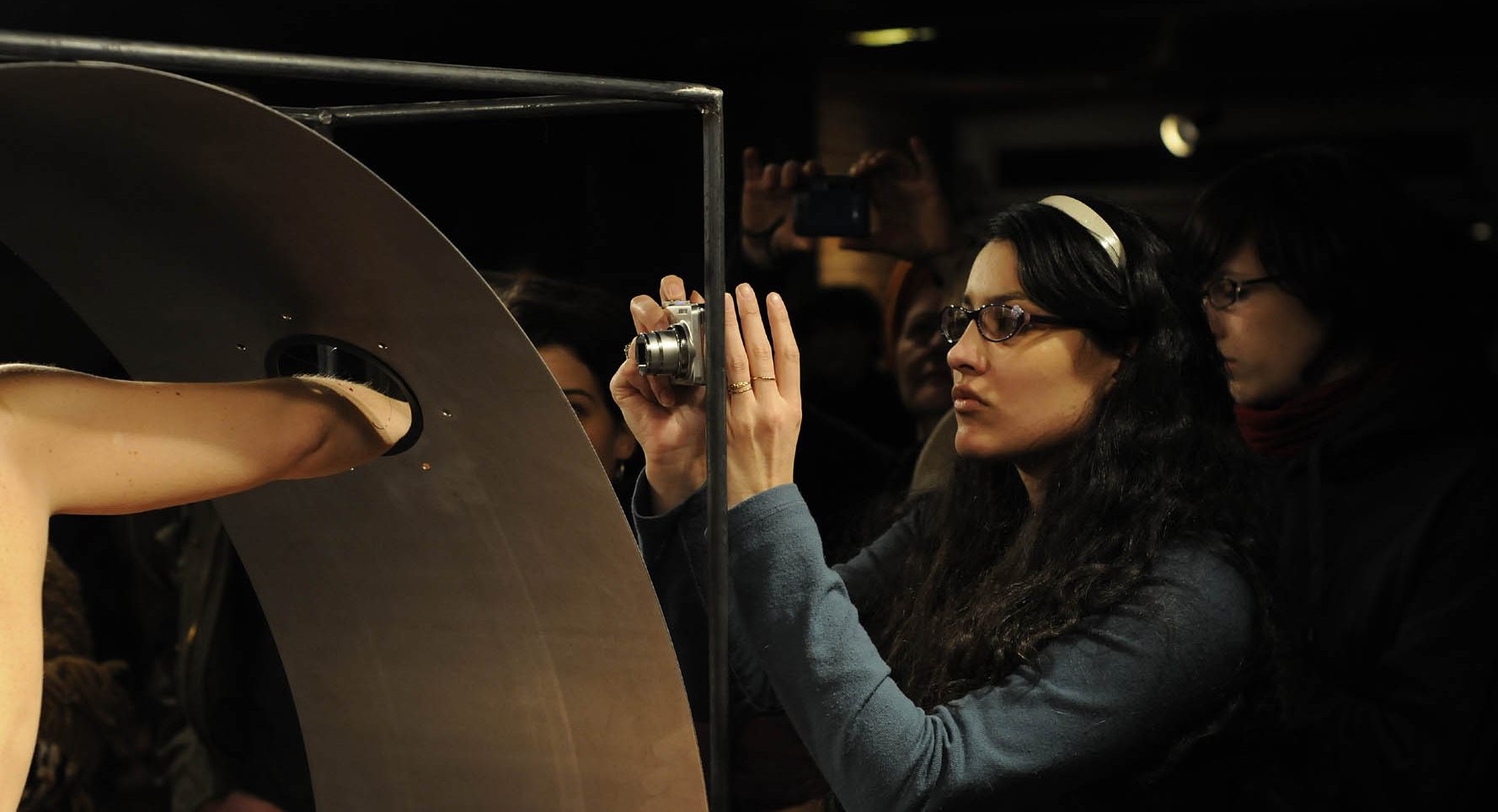 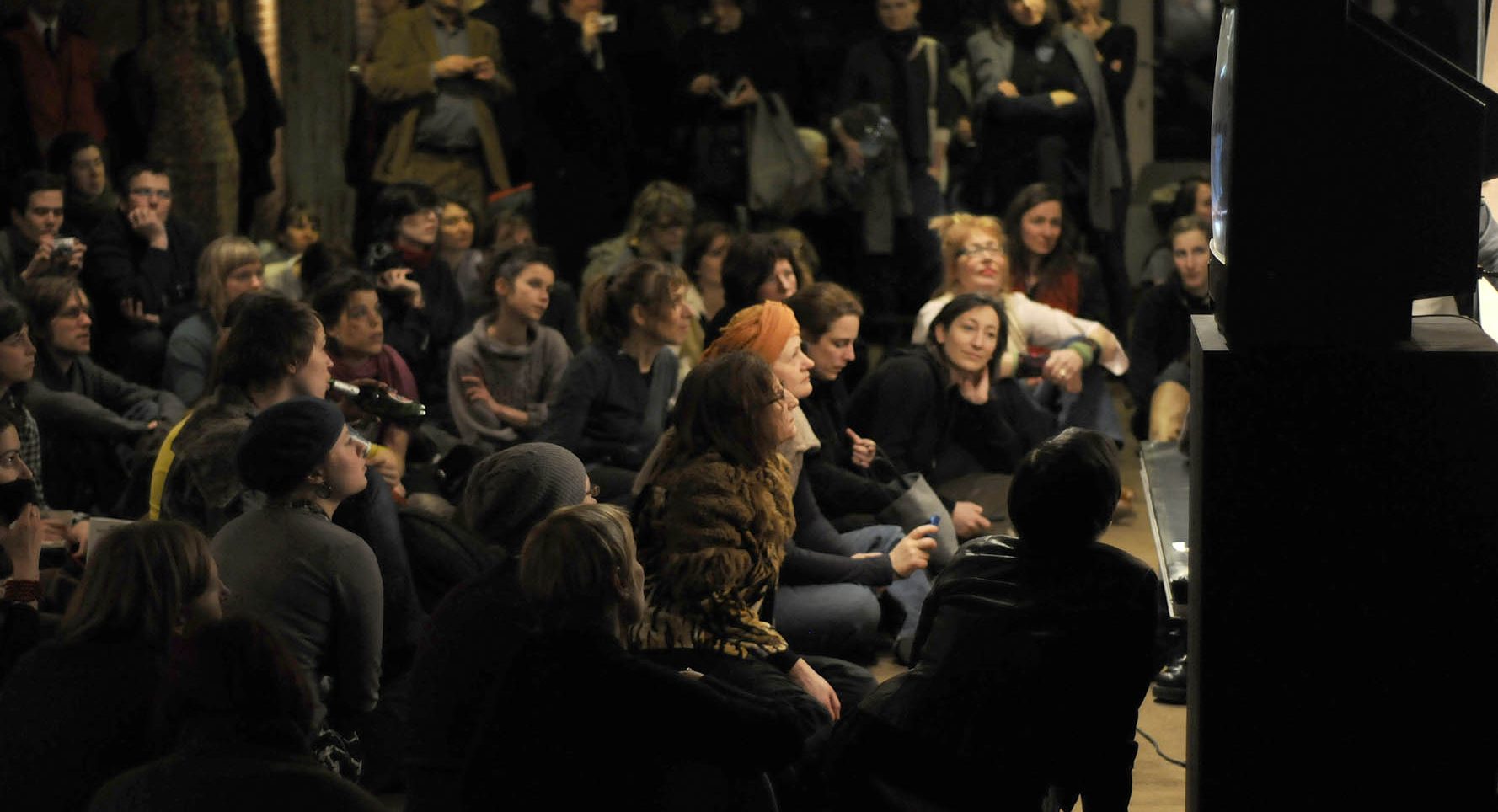 Vitruvian Body is a critical embodiment of the “ideal proportions” of the human body, defined as such by the Roman architect Vitruvius.

I put my hands and legs in the holes of a metal construction, especially built for the performance. This construction mimics Vitruvius’ geometric drawing, which consists of a circle and a square, within which man’s body represents correlations of ideal human proportions with geometry. These correlations are also known as the “cannon of proportions” or the “proportions of man” and were used in architecture.

Oleg Mavromatti stitches up my wrists and my legs with a surgical thread to the metal construction. I speak through the whole performance and I tell stories about this action and what led to it.

Before the beginning, I invite people from the audience to make photographs of the action with digital devices they have in hand-telephones, photo and video cameras. They are allowed to be as close to me as they want and use flashes.

This collaborative work with the audience is applied to almost all of my recent performances. It reflects the era of digital and Internet technologies, which allowed people to create their own news and mythologies. 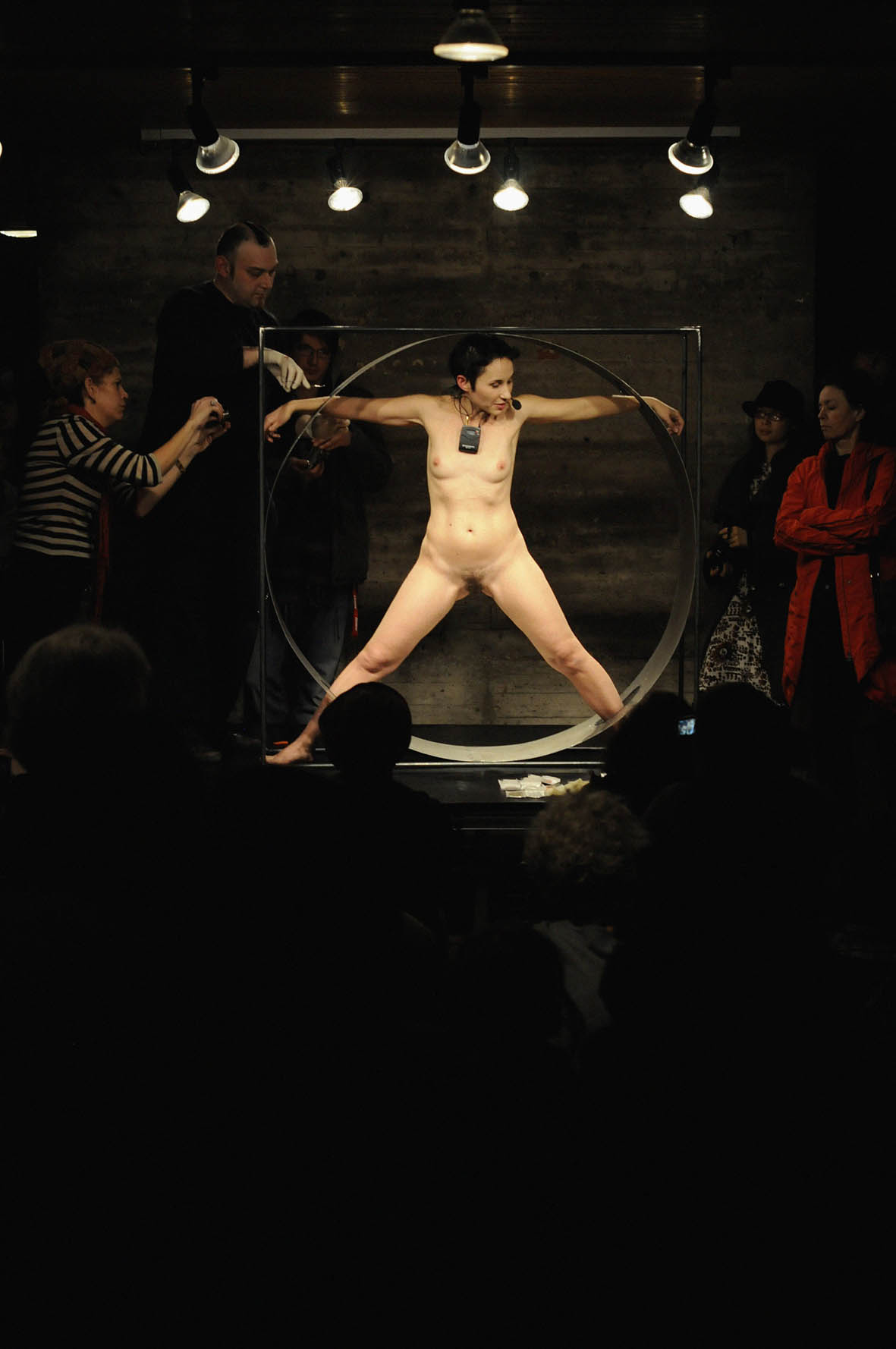 “This impulse to use the body as canvas is continued in Boryana Rossa’s performances. The exhibition and archive featured an earlier work by the Bulgarian artist in which she sewed her labia together. In contrast to some other performances at the conference, which aimed to re-stage feminist work, to re-position, re-consider or even update it for a contemporary audience, in her conference performance, The Vitruvian Body, Rossa sought to challenge an archetype: what she called the ‘anthropocentric and malecentric’ classical ideal of the body.

Wired up to a headset, Rossa addressed the audience in a matter-of-fact tone while undressing and positioning herself inside a metal, modern-day equivalent of the orb enclosing Leonardo da Vinci’s perfectly proportioned man. Speaking in Russian, she then directed her colleague Oleg Mavromatti in sewing her arms and legs to the apparatus. This spectacle was witnessed not only by an official videographer but by various audience members’ cameras, mobile phones and video cameras – all encouraged by the artist. Anyone venturing behind the contraption could see blood running down Rossa’s leg.

Once the artist intensified the performance to have her lips sewn shut, as a protest against censorship in the Czech Republic, many in the audience flinched, as Rossa was clearly in pain and blood ran down her chin. However, she had also invited a member of the audience to cut her free, and that allowed a certain amount of relief: we observed and were complicit in her pain but we could also participate in her liberation. Endearingly, several older artists, including Stötzer, approached Rossa afterward and hugged her, as if offering comfort as well as congratulations for her performance/ordeal. The political doesn’t get more personal.The ‘re.act.feminism’ archive is touring to Ljubljana’s City of Women in March and to the Kunsthaus Erfurt in April.” 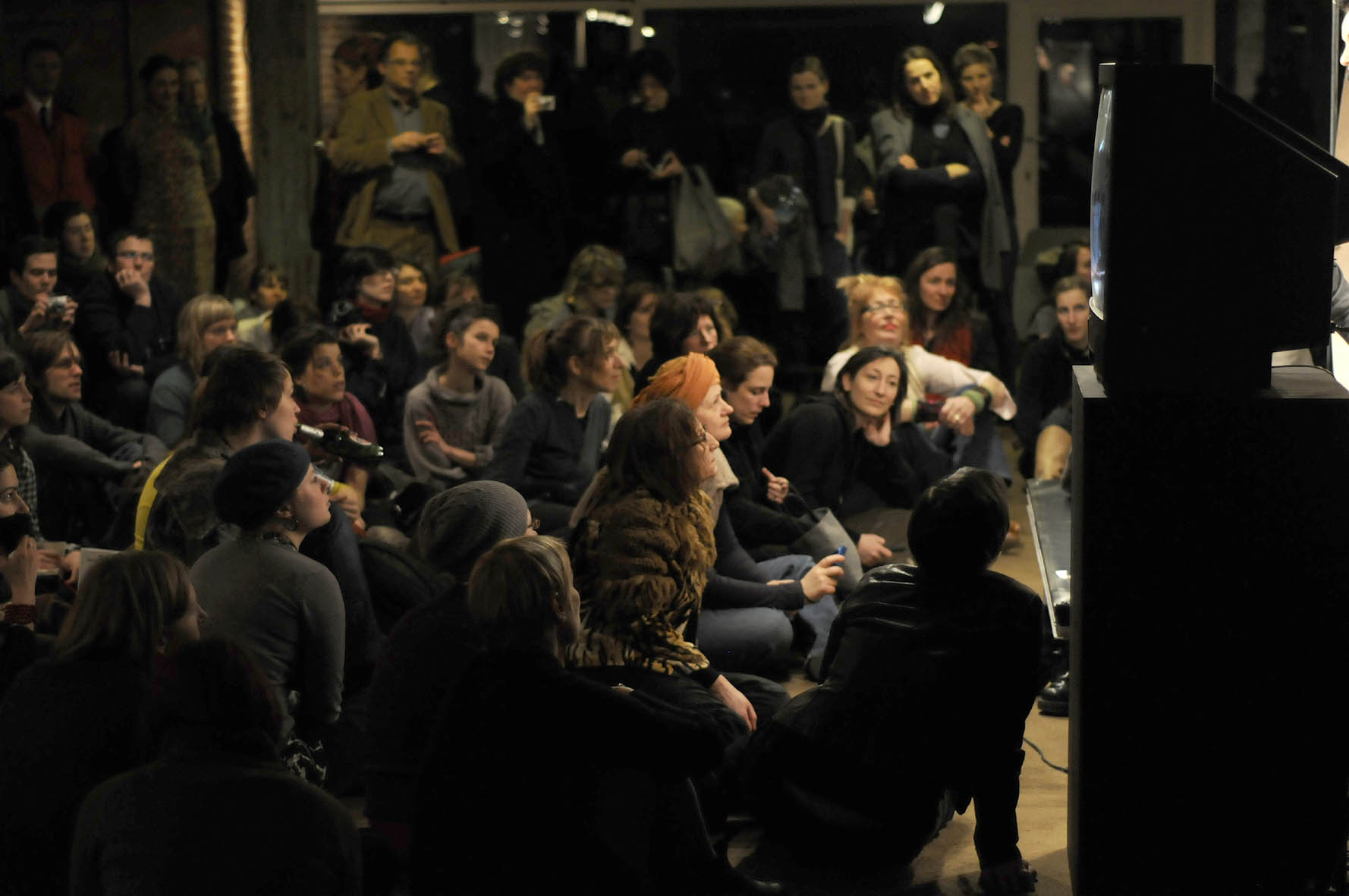 S: I was watching your performance and lecture, The Vitruvian Body, and you seem so relaxed, while Oleg is suturing your body to that metal circular structure. And the pain you may have felt did not register outwardly in your expression. Meanwhile, there’s a palpable sense in the audience of a quiet trepidation or intense concentration.

Because we are not interested in shock value in our art. We are more interested in what we are saying with the work. We want the audience to think about what the performance symbolizes. We first started using stitching in The Last

Valve (2004), a performance where I stitch up my vagina. The piece was performed in our apartment in front of a five-person audience. Nobody wanted to show it. During the action, there was a lot of conversation between me and Oleg of a technical nature – what to do, and how. There was some interaction with the audience, who were mostly friend-artists who were documenting. The conversations were related to taking pictures. During the second piece with stitching – in the

We have a piece titled, About the Living and the Dead (2006, RIAP Festival, Quebec City), which is about mediated violence. We incorporated rubber wounds that you can find in Halloween stores, stitching them onto our faces or body with surgical thread. It was a fake wound, with a little bit of our real blood on it. Again, we gave the audience an opportunity to take pictures. We also had two cameras beaming the live action of the performance onto the wall. These cameras were taking close-ups and projecting them. We were discussing this process with the audience, asking them if they preferred to see the real performance or the projected images.

They had very different reactions. Some people liked the distance provided by the projection. But other people felt that the projections were more confronting than the live action. For us, it was important to give them a way to detach themselves from the physiology of it. Another reason for asking the audience to take photographs was that at the time, in 2006, phones with cameras started to appear and were becoming more popular.

Audience documentation became part of our commentary, examining how images of events are easily created, reinterpreted and distributed with the spread of digital technologies.

S: So, the question of pain and wounding, and what’s fake and what’s real, becomes wrapped up

in the effects of technological mediation?

B: Yes; and the work questions how we construct pain. Something can look very painful, but it might not be painful at all. With the Vitruvian Body (2009, Akedemie Der Kunste, Berlin), we already figured out that asking the audience to take photos helped them focus more on what was being said, as opposed to being overwhelmed or shocked by it. At the end of the performance I invited the audience to cut the surgical thread. This part is not shown in the online video on YouTube. This included the part when Oleg stitched my mouth, which was the most painful part. The cutting of the thread, by the audience member, is also not shown.

S: Aside from pain there’s also an element of humour in your work. The way you put these two contrasting actions in tension, the suturing on the one hand and the delivery of an art history lecture on the other was very compelling.

B: Well, we think that everything must have an element of humour in it. It doesn’t happen all the time, but most of the time we try to do that. At the same time, our humour might be a little bit dark. If we think about death, for instance, or some disasters, these things are so horrible that it’s impossible to comprehend it. We’re not being cynical though; it’s a different type of humour that I’m talking about. 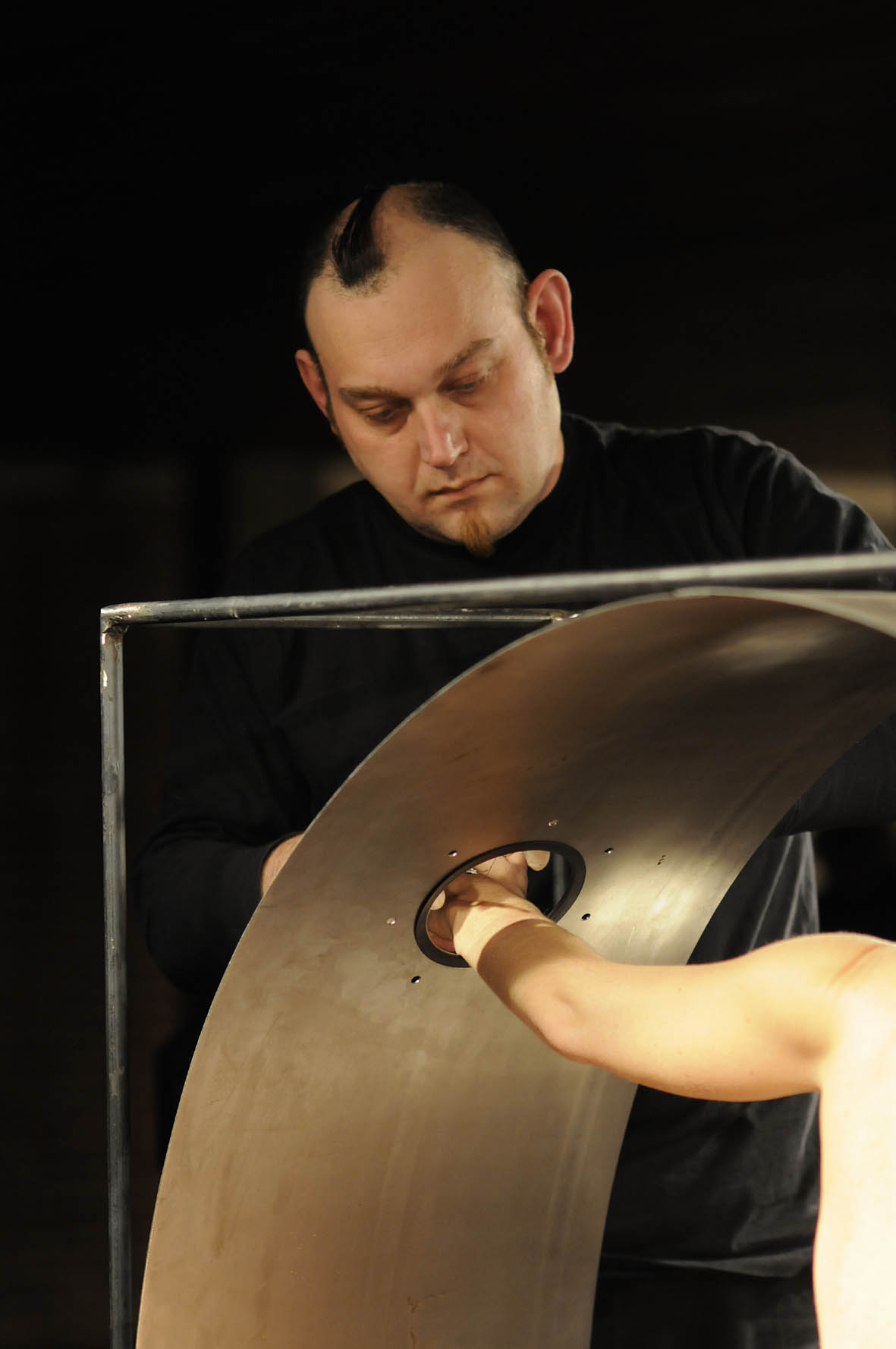